Today let’s look at two different types of polynomial division: Polynomial Long Division and Synthetic Division. Long division will work when dividing by any polynomial, synthetic division only works when the divisor is a first degree binomial.

This is definitely a case where the explanation is trickier than the process. If you find the text confusing, start with the video tutorial, and then come back to this written explanation.

It’s likely been a long time since you thought about long division, so let’s refresh first. Imagine 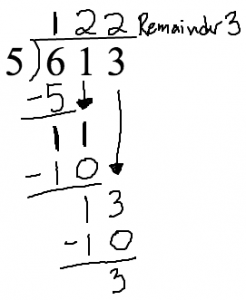 You can write this result as:

Our example problem will be

. In this case, the divisor is

In the long division problem above, our first step was asking how many times 5 went into 6. We start similarly here.

Polynomial Long Division is tricky. None of the individual steps (once you get used to them) are particularly hard, but there are lots of places to make little mistakes. Most often, mistakes happen during subtraction – people lose track of negative signs and end up adding by mistake.

If your divisor is a polynomial of degree 2 (has an

term) or higher, you need to use this long division method. However, if you’re dividing by a first degree binomial (like

), you can use Synthetic Division, which is much less complex.

Again, our example problem is

I’ve tried to explain these procedures in words, but lots of people learn by watching. Here’s a video demonstrating both polynomial long division and synthetic division:

Long post! How do you feel about polynomial long division or synthetic division now? Does it make a bit more sense than when you started? I think synthetic division is wicked cool – I hope you like it too! Please let me know what you think in the comments below.