Today we’re going to begin a dive into trigonometry. Eventually we’ll talk about everything from right triangle trig to the unit circle to trig functions. For now, let’s start at the beginning: Triangle and Trigonometry Basics.

In order to talk about trigonometry, we have to be on the same page about certain facts and standard ways of thinking about triangles. Here are some of them: 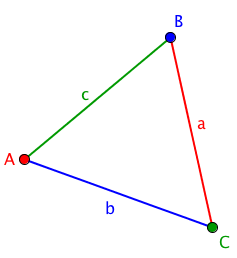 For our purposes, we’ll represent the angles of a triangle with capital letters, usually A, B, and C, and the sides with lower case letters, usually a, b, and c. Angle A is formed by two of the sides of the triangle; side a is “opposite” that angle, or the one side that doesn’t touch angle A. Same with the other sides and angles – if they share a letter, they are opposite each other. 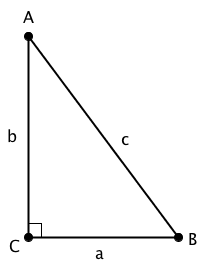 In right triangles, we can use opposite, adjacent, and hypotenuse to talk about the sides of the triangle relative to a particular angle. The names of the sides change if we focus on a different angle. We only use these words when focusing on the acute angles; never the 90° angle.