. Remember: every point on a graph is an x, y pair that makes the function equation true. For purposes of demonstration, let’s use this function:

Parabolas! And if the word parabola doesn’t mean anything to you, then they look somewhat like the St. Louis Arch. Here are three quadratic functions: 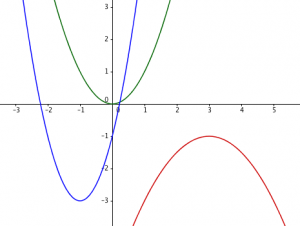 The most basic quadratic function is

, which is shown on the graph in green (passing through the origin). You can see that the other two graphs are distorted versions of that basic graph, stretched, shifted, and, for the red graph, flipped upside down.

In order to graph quadratic functions, we will concentrate on these attributes: y-intercept, x-intercept(s), axis of symmetry, partner points, and vertex. 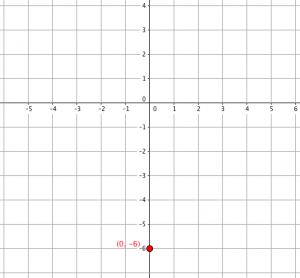 The y-intercept of a function is the place where the graph crosses the y-axis (the vertical axis). No matter where you are on the y-axis, the x-coordinate is zero.  To find the y-intercept, plug zero into the equation as the x-value.

is the y-intercept. You can plot the point 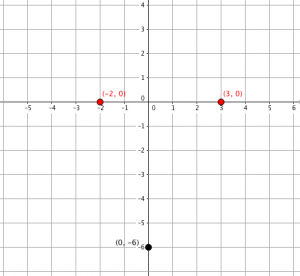 You already know how to do this! Instead of y or f(x), set your equation equal to 0 and solve the quadratic equation for x. These values, if there are any, are the x-intercepts, also known as the roots or the zeros of the function.

. These are your x-intercepts, where y is zero. You can plot

You can use the power of the quadratic formula to predict if a quadratic function will have roots and if it will be factorable. You use the discriminant,

, which is the part of the quadratic formula that lives under the square root symbol:

is negative, you can’t take the square root, so the parabola won’t intersect the x-axis. If

, then it will only intersect the x-axis once – the vertex will be on the x-axis. If

is positive, you will definitely have two x-intercepts, and if

is a perfect square, then the equation is factorable.

You may have noticed when you were looking at the first picture of parabolas above: parabolas are symmetrical. They have a lowest or highest point (called the vertex), and a vertical line through that point is called the axis of symmetry. If you had a parabola on a piece of paper and folded the paper along the axis of symmetry, the left and right sides of the parabola would line up with each other. This means that any pair of points with the same y-coordinate (which I call partner points) will be equally far from the axis of symmetry.

Since the x-intercepts both have a y-value of 0, we can average them to find the axis of symmetry. 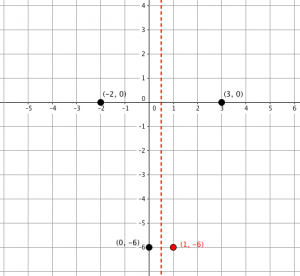 is the axis of symmetry. You can add that into your graph with a dashed line.

Note: If your function does not have any x-intercepts, you can find the axis of symmetry with the equation

, which is part of the quadratic formula. For this example: 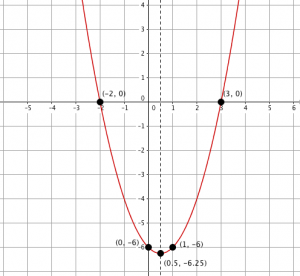 We already know that the vertex, the turning point, lies on the axis of symmetry. This means that we already know the x-coordinate of the vertex! You can plug that value in for x in the original function equation.

For our example: plug

. You can plot the vertex now at

, and then connect your plotted points for a sketch of the quadratic function!

Depending on how accurate your graph needs to be, sometimes finding the vertex and knowing which way the parabola faces is enough. Sometimes you only really care about the x-intercepts and smiley/frowny. Sometimes you want as much detail as you can get – you can get even more points to plot if you pick an x-value, plug it into the equation to get the y-value that goes with it, and then plot it along with its partner point. In another post we’ll talk about transformations of toolkit functions, another way to graph quadratic functions that for some people feels less fiddly and more intuitive than this method.

Did you learn anything new from this post? Do you have a different method of graphing quadratic functions that you’d like to share? I would love to know what you thing – please comment below!