When I learned how to graph polynomials I felt like I had gained a superpower. For some reason it always struck me as such a neat thing to be able to do. As they say, with great power comes great responsibility, so I am responsibly sharing my superpower of graphing polynomials with you! You might want to brush up on polynomial vocabulary before diving in. 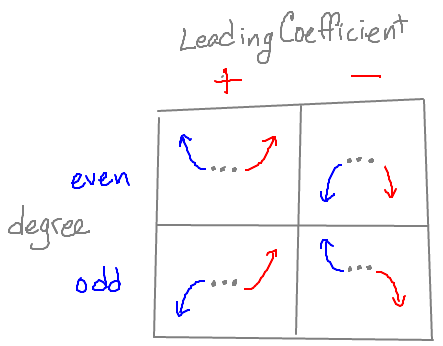 But… the polynomial is factored!

Fear not! You got this.

First, the right side:

Next, the left side:

Look at all of the x‘s again. Count them. If you have an

counts as 6 x‘s, etc. The number of x‘s you counted in the function is the degree. The same even/odd rules determining left side behavior from above apply.

Now that you’ve got an idea of what the “arms” of the polynomial look like, let’s figure out the middle.

Here’s where we’re hoping that the polynomial that we’re playing with is in factored form. If not, other methods will be needed that are not included in today’s post (the rational root theorem and synthetic division). Get that polynomial factored and then come back.

Step by step with example polynomial

You first want to focus on what happens at each of the roots. You know that there will be an x-intercept at each of them, so you can start by plotting those points. In our example, plot 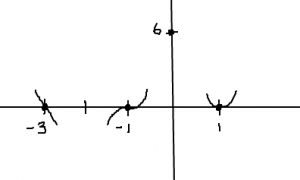 You might want to figure out (by plugging in

) and plot the y-intercept at this point. For our example,

Now, keeping in mind how the graph will act at each x-intercept, the end behavior, and that polynomials are smooth and curvy, sketch the graph in. For now you won’t know where the peaks and valleys are – you need calculus for that – but it’s a pretty decent approximation of what the actual graph looks like. 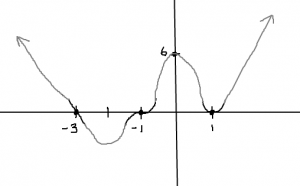 Did you learn something new? Do you have a question for me? Please let me know by commenting below!